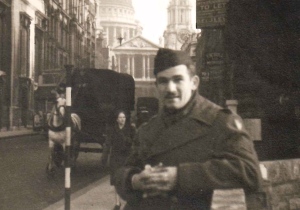 Several years ago, I was looking for pictures of my Dad in my Mom’s old album, where she kept photos he sent home from overseas during World War II.  I found a snapshot that I especially liked of my Dad in London, with St. Paul’s in the background.  But the photo needed a little help. So  I scanned the image into the computer.  The image was tilted, so I rotated and cropped it to straighten it out, and improve the composition.Then I adjusted the contrast for the sake of the patterns of dark and light.  Then I opened the image in Painter IX to do some clean-up.  I had to remove some black marks and scratches, so I used digital bleach, scratch remover, and even some cut and paste. It’s not really just about the photo, although I am glad that I could fix it up. It was nice to spend time on this today, and it made me smile to think of my Dad in London. He went to Picadilly Circus, and Saint Paul’s, just like I did.  He tried out the red phone booths and the pubs.  I wonder, did he ride the double-decker bus? I hope so, and I hope he liked it as much as I did!

Photo restoration by Randa Dubnick, from a snapshot taken by one of my father’s army buddies.  I originally posted this to Flickr and to Randiart.blogspot.com on August 28, 2006. All rights reserved.