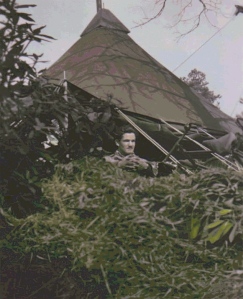 Last year, around Veteran’s Day, I came across a small snapshot (2 x 3 inches) in my mom’s photo album. She met my dad in 1943 in Pueblo, Colorado at a USO dance, and they got married a few months later, in April, shortly before he went overseas. While he was away, she kept a photo album with pictures of what was happening in Pueblo as well as the photos that he sent her, a number of them such as this one. I used Painter to colorize and posterize the image. I don’t know who took the original photo, but of course it was one of his army buddies. I don’t know as much as I would like to about what he did during the war.  Mostly I was told that he played the piano in the band (he did), which is what my folks told me when I asked. And I don’t know much about this photo. But on the back of the photo, in my father’s handwriting, it says “March 4, 44” and “Me in my foxhole. Thinking of you.” Maybe that’s all I need to know.

Still, I would like to learn more.  There are a lot of clues in my dad’s photos and my mother’s old album.  Anyway, here is the original snapshot: 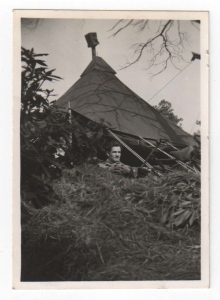