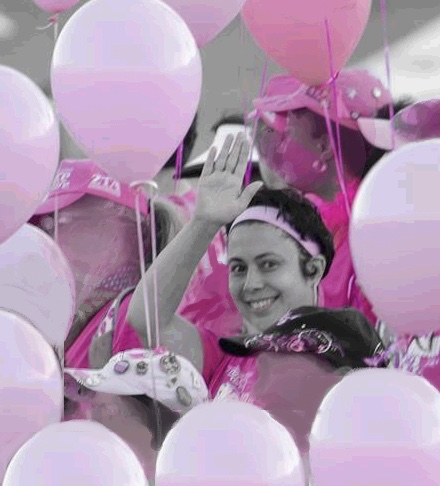 This is an illustration for a book that I recently edited, about the late Leni Ohlbrecht, seen in the photo. The book, written by her mother-in-law Elaine Ohlbrecht, is about the experience of having breast cancer. It is based on Elaine’s interviews with Leni and her family and friends, but above all the book is Elaine’s tribute to her daughter-in-law. The image posted here began with a photo taken by Leni’s husband Tyler Ohlbrecht. Tyler’s photo showed Leni waving in the midst of a cure cancer fundraiser. In the image sent to me, filtering had already been applied so that the image was black and white with pink tones. It was already a great picture ! But because Leni was surrounded by other people, clearly identifiable but unknown to Elaine, it wouldn’t be possible to seek out permission to publish their images. So I said I would see what I could do. I opened Tyler’s photo in Painter and began by softening the focus on the other faces with motion blur and some posterizing, but leaving Leni’s face in clear focus. Then, where possible, I used some brush strokes in pink tones, taken from the photograph, to paint over some details. And then I used copy-and-paste to create additional balloons, positioning them to hide some of the other faces. This also highlighted Leni in the image, and reflects her positive spirit, so I was pleased with that. Finally, I cropped the image to get the composition shown here. It was an honor to collaborate with Tyler on this picture of Leni.