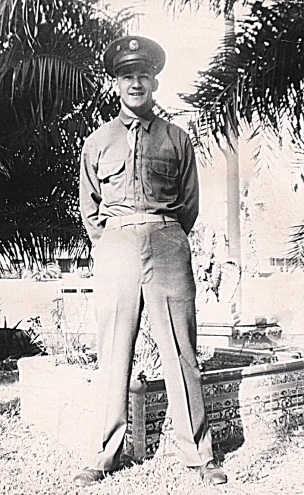 It’s Veteran’s Day, so I was looking for a World War II photo of my father. He was from Brooklyn, but after enlisting, was briefly stationed in Pueblo, Colorado, where he met and married my mother, a few months before he would go to Europe. I usually look for war-time photos in the album mom kept, beginning with their courtship and marriage in Pueblo, including photos that my father sent back from overseas. But today I also looked in the boxes of my dad’s photos that my cousin Rori sent me last year, photos my father had kept for years. I was really looking for photos of Europe today, so nearly passed this one over. I had seen it before, and from other photos in my mom’s album, had concluded that my father must have been stationed in Florida right leaving for Europe. But before casting this photo aside, I turned it over to see if it was dated, and to my surprise, on the back found a love letter to my mother, written in Spanish.

My father studied Spanish in school, and he loved it. (Later, he read to me from the Spanish Reader’s Digest, and became the go-to person for Spanish-speaking customers in our family furniture store in Pueblo.) Did my mother know Spanish? No, maybe a bit of French. But I am sure that she loved the fact that he spoke Spanish. And I know she loved my father enough to find a way to figure it out.

Well, I fell in love with my father’s Spanish love letter, so I am posting it, even though it wasn’t at all what I was looking for. At first I thought this might not be the best choice for a Veteran’s Day post. But courage in war is about putting what you love on the line. That my father found love shortly before leaving to do his bit against the Nazis in World War II raised the stakes for loss. My parents married anyway. They didn’t know the future, and the fact that my father he found love on the road to war made his path all the more courageous.

People live on in what they pass along, how they are remembered. My father passed on his love of music, his love of languages, and most important, his kindness and openhearted nature. And his courage in the face of tyranny, an example I think about more and more. His memory is always a blessing for me, as was his life.
So here is the text of his letter in Spanish and in English (my translation):
“To Ruth
Para que tú puedes recordarme. He buscado las palabras para escritir quí, pero sín exito. Tú tienes un corazón de oro, y nuestros mentes viajar par il mismo camino, que nunca estoy tan feliz como cuando estoy contigo, y el salido de tu compania es con más dolor que perder el diente. Ésta no basta. Tú sabes lo que quiero decir.
Sinceramente,
Hy”

“To Ruth
So you can remember me. I have searched for the words to write, but without success. You have a heart of gold and our minds travel the same way, that I am never so happy as when I am with you, and leaving your company is more painful than having a tooth pulled. This is not enough. You know what I want to say.
Sincerely,
Hy”